Before you start searching homes for sale, explore Clarendon Hills to find the perfect spot in your ideal community.

The Village of Clarendon Hills, incorporated in 1924, is one of the smaller western suburbs with a population under 9,000.  Adjacent to Hinsdale, Clarendon Hills shares many attributes of its larger neighbor: high property values, small local government, and a volunteer attitude.  The Village is anchored by its central business district located next to the Clarendon Hills Metra Station.  The 1911 building that originally housed the post office and general store still stands today, recently Quinn’s, a popular family owned coffee shop, closed and the storefront is available.

If you ask a typical resident of Clarendon Hills, they will often describe their village as “Mayberry-esque”.  While the village keeps up with the times, most residents are attracted to the simple way of life in Clarendon Hills that reminds them of when they grew up.  Parking meters are non-existent and the small size of the village provides the opportunity to walk from virtually any home in town to the train. 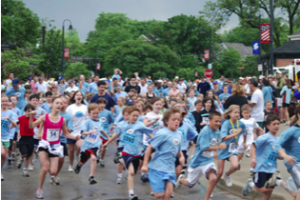 During the summer, the air fills with music and sounds of neighbors dancing and laughing as the free open air concerts series “Dancing in the Streets” takes place in the town “triangle”.

Also very popular with the residents are both the annual Daisy Days weekend festival for children and the annual Father’s Day Daisy Dash 5k race.

All residences in Clarendon Hills, except small sections of town, lie within the boundaries of the very highly regarded Hinsdale/Clarendon Hills Elementary School District 181.  Residents south of 55th Street and east of Richmond are within Westmont’s Elementary School Districts 60 and 201.   Excepting the area east of Richmond, all homes within Clarendon Hills feed into the perennially ranked Hinsdale Central High School District 86.  Living within Districts 181 and 86 is great not only while your kids are in school but also for resale value. There is never a shortage of families wanting to locate within the highest ranking school districts.

An express train to Chicago is only 25 minutes from the Clarendon Hills Metra station. Quickly accessible from I-290, I-88, I-55 and I-294, Hinsdale offers fast and convenient pathways to the Chicago Loop, the better part of suburban Chicago, and both Midway (25 min) and O’Hare (20 min) airports.